“Greengauge’s input was essential because nobody in the design team had the specialist skills to give the client the necessary reassurance,” says  architect, James Crick. “In this case, it was the right decision for the building in terms of its appearance and heritage.” 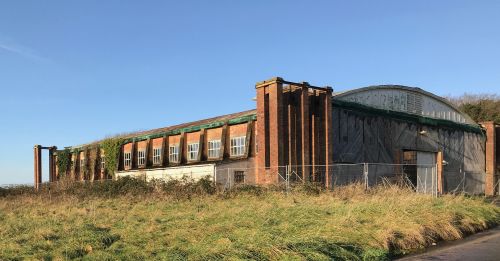 We have been advising on a unique retrofit project to convert a one hundred year old hangar into commercial space.
The largely unaltered, GradeII listed building lies on an isolated site on one of Britain’s great strategic airfields. Hangar 16U was built in 1917 at Filton Airfield in Bristol. The airfield was home to the development of the First World War fighter planes, Spitfires and the supersonic Concorde.
Primarily used for storage, the building’s original purpose was for the Royal Flying Corps to receive bi-planes from the manufacturers, which were then assembled and inspected before being sent to various squadrons. The 50m x 20m Hangar 16U employs a distinctive wide-spanning timber Belfast truss, a common feature in hangars and agricultural buildings in the late 19th and early 20th centuries.
However, in spite of the building’s illustrious past, the hangar had been neglected. There was also concern that in transforming the building into a comfortable commercial space, the increased heating and moisture levels would cause moisture ingress to the building’s fabric. We undertook an in-depth moisture risk assessment and developed a natural ventilation strategy enabling the building to be reinvigorated with a bold new conversion.

Moisture problems
Given that the hangar is an unheated, uninsulated ‘shed’ with a single skin (approx. 100mm thick) of brickwork, there was concern that moisture would condense on the internal surfaces promoting mould growth. The absence of a damp-proof course also meant that rising water could further exacerbate the issue.
“We felt that the brick was susceptible to moisture ingress,” says James Crick, senior architect at Ferguson Mann Architects. “Not only would this give rise for unsightly and unhealthy mould growth, but it was also perceived that frost damage may be acerbated by sharp differences between internal and external temperatures once the building was in use. This could cause the brick-face to decay and essentially fall apart.”

Hygrothermal risk assessment
These concerns led to our appointment to carry out a specialist hygrothermal risk assessment, with support from regular collaborator Joseph Little. The study identifies where moisture might accumulate at any point of the walls assessed. This information is used to assess the risk of mould and other moisture related problems.
For this specialist assessment, Greengauge conducted on site testing of the hangar’s brickwork to establish the type of brick (it was found to be a standard machine made red brick, Imperial size), its water uptake and absorption properties. Samples were taken and some lab testing was carried out at the engineer’s office. The data collected enabled the software analysis adopted for the project to be further refined.
Specialist software analysis
The software used by Greengauge for the assessment is called WUFI. This is a specialist tool which represents how moisture moves through different parts of a building’s structure. WUFI was developed in Germany and is an acronym for Wärme Und Feuchte Instationär or heat and moisture transiency. The software uses the latest findings regarding moisture transport in building materials. Toby Cambray, co-founder of Greengauge explains how WUFI works.
“We start by thinking about the most appropriate way to represent a wall buildup and put that information into the WUFI software, then add things like relevant weather, internal conditions and insulation, then that whole arrangement is simulated,” says Toby.

“That simulation gives us an estimate of how that wall will behave and what the moisture levels at different points in time will be at different areas in the walls. WUFI is deceptively user-friendly, but you need to understand in depth what you are simulating.”

WUFI can be used on proposed buildings, but the software is more commonly used on retrofit projects like Hangar 16U. Greengauge has used WUFI on many kinds of different projects, including identifying issues with internal wall insulation and in a forensic situation where the software helps to diagnose faults that aren’t immediately obvious from a site inspection, or to provide supporting evidence.
Unique solution to preserve building fabric
Prior to Greengauge’s appointment the architect had explored some options to help remedy the building’s moisture problems. Given that the hangar was an historic building, it was desirable to preserve as much of the building’s original appearance as possible, and certainly to retain the external exposed masonry (thus ruling out external cladding at an early stage). One of the few viable solutions involved adding breathable internal insulation (wood-fibre or thermally enhanced lime plaster) to the internal surfaces. Greengauge assessed these proposals, including the impact on the building if insulation wasn’t added.
The proposal favoured by Greengauge involved insulation being added to the hangar’s internal walls due to the benefits of improved thermal comfort and a reduction in energy consumption. However, given the aesthetic value of the historic building and a desire to retain the exposed internal brick walls, an alternative solution was found that all parties agreed on.
This proposal involves a modification of the proposed natural ventilation strategy that works in conjunction with a mechanical and electrical booster system, all linked to the building management system. The BMS will be amended to monitor the relative humidity of the internal air and brickwork and will detect when there is a risk of mould forming. If a problem is detected, the BMS will increase the ventilation to moderate the moisture levels. Internal insulation will not be installed as part of this solution. Externally the WUFI modelling demonstrated it was necessary to apply an invisible water-repellent coating to the masonry, which, whilst allowing the building to remain visually unchanged, will prevent excessive rainwater entering the fabric.

The solution means that the building’s internal historic fabric, including its spectacular original roof truss feature, has not been compromised and a balance between natural ventilation and condensation risk has been successfully achieved.