Renovating a listed building to improve the energy performance, while preserving the culturally valued qualities of the original, can be a delicate exercise – often involving careful design, expert analysis and specialist materials.

Renovating a listed building made mostly of in-situ poured concrete at least avoids a lot of the worry about breathability, and gives you a good solid substrate to fix the insulation and any new components – right?

Despite its massive embodied impact and seeming indestructibility, concrete is not always that robust. Furthermore, the ‘infill’ parts of the concrete-framed buildings may not be robust at all.

This was the problem that faced the team undertaking Phase II of the overhaul of the Park Hill Flats – a huge Brutalist development set on a hilltop, overlooking the city of Sheffield.

The building is architecturally famous for its pioneering ‘streets in the sky’ approach to post-war rehousing. Initially the 995-home development was a success; popular with tenants, many of whom moved from homes without even bathrooms. But over the decades, as the local steel and coal industries were allowed to decline, the fortunes of the estate declined too. Money to keep the flats in good repair dried up, the flats became less popular, and the dreaded ‘sink estate’ status loomed.

By the late ’90s, things were dire and the owner, Sheffield City Council, was faced with the invidious prospect of demolition. At this point, English Heritage rode to what would be the rescue of the buildings and in 1998 they were listed.

Sheffield City Council entered into a joint venture with developer Urban Splash – who became the new owners. Redeveloping the whole estate at once was too massive a task, so redevelopment in phases, with some units being sold each time to help with cash flow, was begun.

In Phase I, completed nine years ago, Urban Splash replaced the brick infill panels between the concrete plates with brightly coloured panels in shades of yellow, orange and red. Although this new appearance is liked by many, there were objections too. The panels were also not selected with thermal performance primarily in mind, so when it came to Phase II, a more subtle approach was decided upon. Urban Splash appointed architects Mikhail Riches, and the team opted to retain the original brick infill, and do their best to upgrade the thermal performance of the fabric.

Architects Mikhail Riches brought in Greengauge to check over the thermal and moisture performance of the proposed fabric upgrade. Greengauge visited the then-boarded-up site (“one of the grimest site visits I’ve done”, says Greengauge building physicist Toby Cambray), tested the fabric for water permeability, and took samples for analysis.

Because of the listed status, insulation would be mainly internal – pretty challenging with thick concrete floorplates and beams spanning from outside right through into each living space.

While the constraints of structure, listing and budget, combined to limit what could be achieved thermally, it was still essential to avoid cold spots inside. So thermal bridge analysis and careful design was still required, to avoid dangerous low surface temperatures that might lead to condensation and mould growth.

The ceilings and floors would be lined with insulation – both to improve sound separation between floors, to reduce the cold bridging effect and raise the surface temperatures inside.

Greengauge worked with the architects to select an appropriate IWI system, to be fitted to the existing cavity masonry panels. However the best laid plans of pretty much every retrofit tend to meet unforeseen challenges when work begins on site.

On this occasion, it turned out that the presumed-to-be-solid blockwork, set to receive the internal insulation, was nothing of the sort. In fact, it had been so poorly laid, and the blocks were so brittle, that it really couldn’t be left in place, and the decision was taken to replace the entire inner leaf with a frame of lightweight steel: because it was a material very familiar to the contractor teams. Between the original design exercise and starting on site, the Grenfell tragedy sharpened the focus on fire safety and all combustible materials had to be designed out.

This alteration opened up a couple of new problems. Firstly, the insulation would have to be placed behind the steel, so that it could form a continuous layer – any insulation between the steel studs would be thermally compromised. The insulation was now hard up against the external brickwork – much more liable to be affected by rain penetration than in the original position, inboard of an open cavity.

“While the constraints of structure, listing and budget, combined to limit what could be achieved thermally, it was still essential to avoid cold spots inside. So thermal bridge analysis and careful design was required, to avoid dangerous low surface temperatures that might lead to condensation and mould growth.” 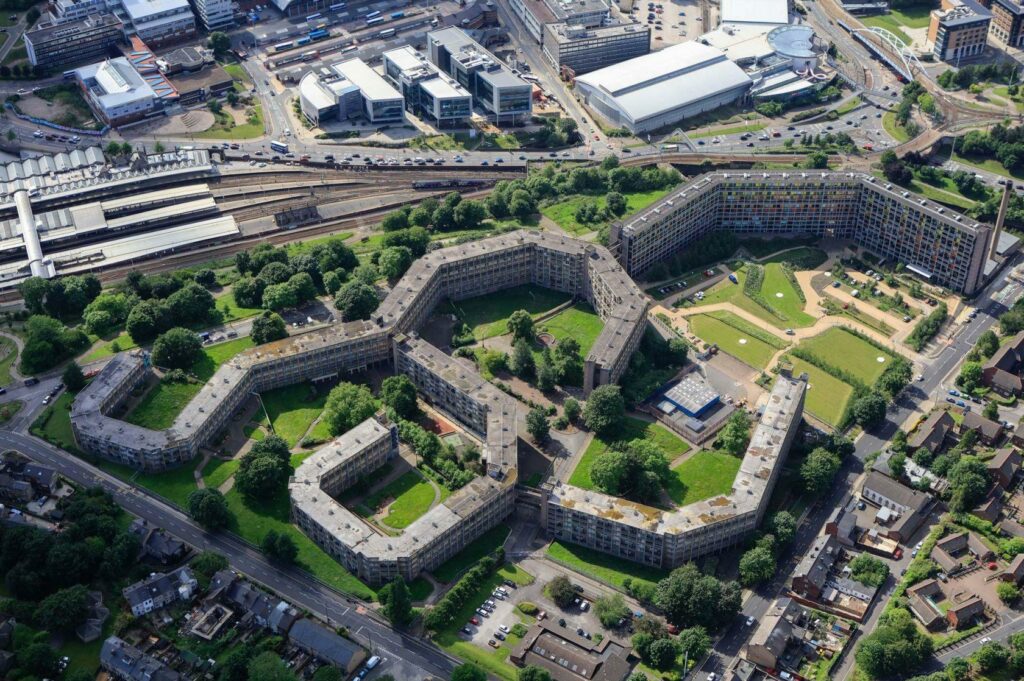 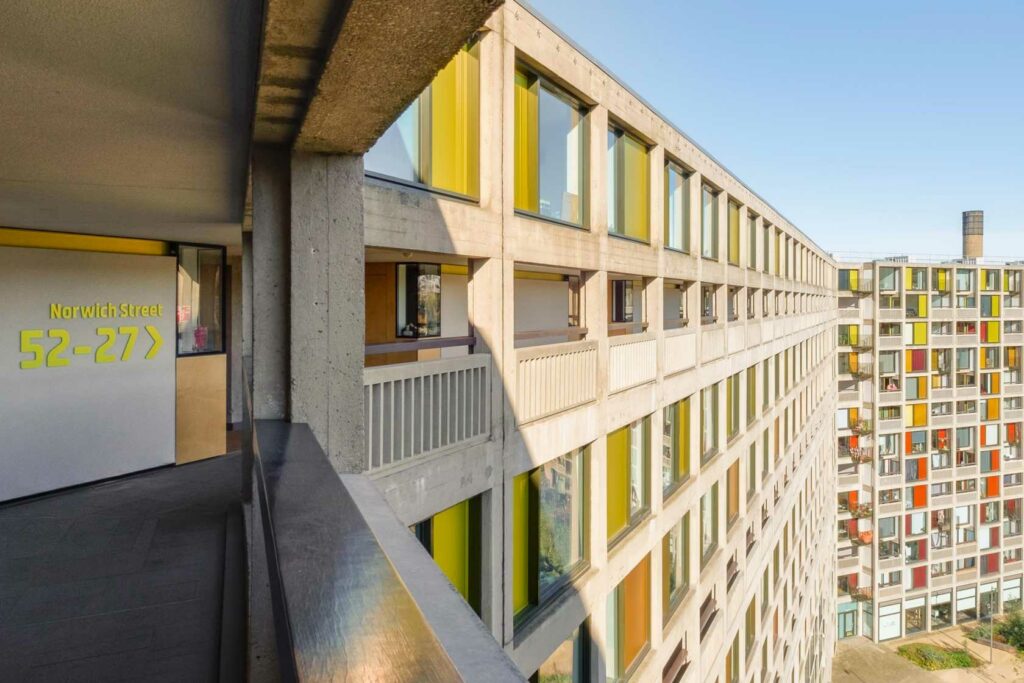 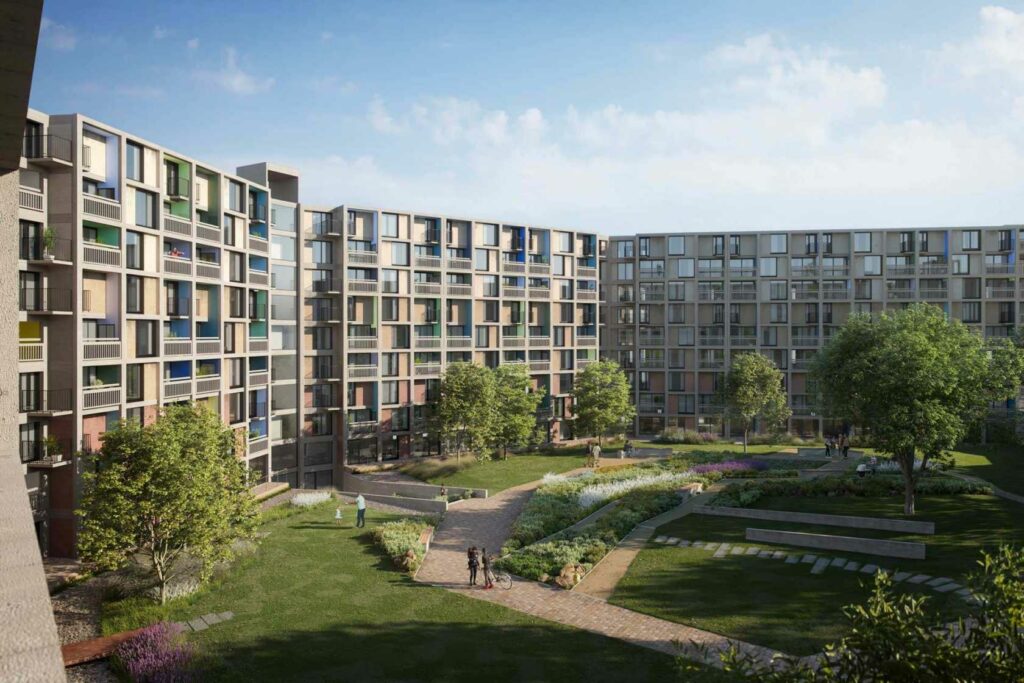 For extra protection, a hydrophobic treatment will also be applied to the bricks, to further exclude penetrating rain.

The second new problem was that the jambs to which the (aluminium framed) windows would be fixed were now also going to be steel. Junctions are always the tricky bits for fabric performance, and here, preventing heat, and moist air, sneaking through the junction and harming the thermal performance and/or the fabric itself, posed quite a challenge.

The thermal bridging could not be solved completely, but by slipping fillets of insulation between elements, and into hollow cavity closers (forming at least a semblance of an insulated reveal) the psi values were steadily reduced, and the risk of surface mould and condensation was mitigated.

While a long straight thermal bridge can be modelled in two dimensions, the presence of steel window fixing straps meant Greengauge were only really satisfied when these point thermal bridges had been modelled in 3D. They found that the steel straps did lead to a significant increase in the psi value of the junction – 40%. This also created a reduction in internal surface temperature, but working with the M&E engineers, the ventilation design was refined such that the internal conditions could be controlled to reduce the risk of mould and condensation.

At the same time as keeping in the heat as far as possible, it was essential that the wind- and moisture barrier was sealed tightly to the window frame. Numerous iterations were discussed with the membranes and tapes snaking along various routes through the various components to adhere safely to the glazing units.

This design process was crucially, a whole-team effort. The chosen solutions had to perform thermally and in terms of wind- and moisture-tightness – but they also had to be buildable, and affordable.

Even the question of which tapes were used to seal which junctions was closely debated: the total length of the window-jamb junctions amounted to over seven kilometres. And the practicality and sequencing had to be straightforward enough to be repeated accurately, hundreds of times, by a large site team.

In the end – aided by the advantageous form factor of dwellings in multi-storey developments – the overall annual heat demand is predicted to be around 80kWh/m2. Fifteen per cent of this is from the linear thermal bridges, even after the team’s extensive work to minimise them.

The Park Hill flats’ external appearance, interestingly, was not the chief feature praised in the 1998 listing – rather, it was the success of the designers in “building high without the problems of isolation and expense encountered with point blocks…. The decks were conceived as a way of recreating the community spirit of traditional slum (sic) streets, with the benefit of vehicular segregation.”

The former head of English Heritage, Simon Thurley has said that “for 20th-century buildings, the whole listed-building system, the legislation and everything based around keeping the fabric, is not relevant. These buildings are about ideas and other things”.

The really high-performing retrofits of post war housing recently undertaken – the Enerphit retrofit of Wilmcote House in Portsmouth for example – have deployed external insulation. Though this is not without its challenges – particularly at height – the thermal advantages are unarguable, Toby Cambray says: “If it wasn’t for the desire to preserve the appearance exactly, external insulation would have been a much more straightforward approach to upgrade this building, but I have been called a philistine!”